German WWII Luftwaffe photo album.  Large size measures 13 inches long by 9 inches wide.  Cover has Whermacht eagle in gold on front and writing in corner.  Cloth tassles on end.  212 total photos, some missing.  Enlisted ranks album, with many nice and unique pictures.  Photos showing lots of Luftwaffe uniforms, some wearing White summer visors, men in flight blouses, some officers shots, several photos of airplanes flying.  Marching LW troops, ship photos but these appear to be freighters.  Photos of troops arriving off a ship, unloading etc.  Several shots of maybe a rally or Patry rally with several Swasitka flags.  Lots of photos of him in the field, with friends, in Winter padded uniforms, a few show a command car off the road, and an LW officer in a Leather coat.  Several vehicle shots, command cars, trucks, motorcycles on a road in a column.  Family shots as well.  There's a photo taken in Africa show LW troops in Tropical uniforms, but only one.  In the back is a large color print of his Marriage certifcate and a small cutout from a paper showing his death in 1951.

German WWII or Pre-war Luftwaffe photo album.  Small size measures 10 inches long by 8 inches wide.  Has 127 total photos some missing.  There is a name in the front cover Schwager Lois.  Luftwaffe enlisted man, shows photos of him and his wife, drilling with more Luftwaffe troops, Camp shots, showing a hill with 30+ zeltbahn tents, Lots of shots of him and his friends all in LW uniforms.  Vehicles pictures, trucks, cars and two show a large Spotlight.  Some motorcycle pictures with troops, some in RAD uniform.  Then there's lots of landscape shots, maybe vacation photos of friends and family as well.

German WWII Reichsbahn photo album.  Small size, in very good shape.  74 total photos.  This one has it all!  Photos include Reichsbahn officals in uniforms, including the White summer tunic.  Photos of switching stations and other Railroad related buildings.  Three photos of a destroyed Russian T-34 tank with Reichsbahn officals standing on it, then the next page shows the Flak 88 gun.  Several photos of rail cars, and an engine.  Lots of photos taken in the field.  A few Winter shots.  Many pictures show Reichsbhan officials.  Nice and unique Railroad officals album.  Measures 8.5 inches long by 6 inches wide.

German WWII RAD photo album.  Large album, Standard style cover and Aluminum spade on the front.  Starts off in 1931,  294 total pcitures.  Ends in 1973.  This ablum shows him moving through the ranks into an RAD officer, best part is postwar photos of him that end in 1973!.  Lots of great shots, him on skis in RAD uniform, then on skis in 1973.  There are several photos taken postwar showing what apeears to be the ruins of his old camp.  That's unique in a photo album.  More photos postwar showing him at various buildings and fields, most likely where he was posted during the war.  Most pages dated.  Many pages clearly set up to show him there during the war, then there in the 70's, a fantastic "Now and Then" format.  Photos showing him on a motorcycle, RAD Bandsman, wearing a combat helmet in the field, Vehicles shots.  This is a rare album as it shows him starting in the ranks and getting promoted throughout the album to officer.  Then all the "now and then" pages are very unique.  Several photos are missing, onion skin pages between each page.  Measures 12 inches long by 9 inches wide.

German WWII or Pre-war RAD photo album.  This one has a Alligator/Lizard skin like cover!  Well made and all photos have white captions under them so easy to read and follow.  110 photos.  There's a flattened flower inbetween two pages.  Time in an RAD camp, lots of work photos, photos of friends and vacation to the beach.  Great shots of drilling with spades, officers inspecting troops etc.  Landmark shots, buildings and more.  Well made and clean!  Measures 13 inches long and 10 inches wide.

German WWII Luftwaffe photo ablum.  This ones a large size and has many photos.  Of interest there are photos of the Dutch Nazi leader Anton Mussert.  433 total photos!  its  BIG album.  Quite a few of Anton Mussert at a rally and at the speakers podium, meeting people on the street as well.  Rare to ever see private photos of Mussert anywhere!  There are about 19 photos of a rally with Anton Mussert in Holland.  Cover is a rough Brown finish with an Aluminium Stuka on front.  Photos cover family life, friends, service and more.  Pictures show a luftwaffe enlisted man throughout.  Several photos of Hindenburgs grave and monument.  Later photos show him as an NCO.  Beach photos of him and girlfriend or wife.  Lots of service shots, him as an NCO in a tunic and flight blouse.  Some in the field shots with troops, buildings destroyed, but lots of "on Leave" photos of him in uniform in different places.  Lots of Army friends and Luftwaffe friends, and many more of family members and family events.  Lots of photos to look through and to BIG groups of Anton Mussert and Hindenburgs grave site.

German WWII or Pre-war RAD (Labor Corps) photo album.  This ones nice, complete and well laid out.  Front cover is padded and has the RAD shield in Aluminum on the front.  First page is a colorized picture of an RAD man, next is Hitler.  62 total photos, one or two missing.  No captions under the pics, but still laid out well.  Many small size, a few large size, a few with vehicles, many of RAD members and most likely his friends.  Onion skin paper between pages.  Photos show drills, camps, lots of RAD work shots etc.  Has cloth tassle on end.  Photo album is in very nice condition. 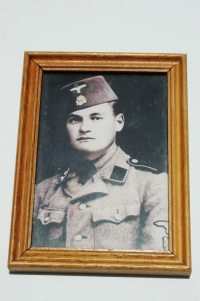 Rare Framed photo of a German WWII Waffen-SS Soldier.  This ones rare as its for the Croatian Waffen-SS soldier.  Simple wooden frame this picture may be a postcard framed, hard to tell.  Its period done as the reverse has a page from a German magazine thats glued over the back to seal the picture to the frame.  Black and White picture you can clearly see his Waffen-SS Fez and the Croatian shield on the arm below the sleeve eagle.  Waffen-SS pictures are rare by themselves, but his is unique as its for a Croatian soldier in the SS.  Size is 5.75 inches tall and 4.25 inches wide.  Very nice condition.  Also on the back is a very small nail for hanging.

German soldiers ablum, this one has his Death Card in front.  Army Obergefreiter starts out with his Hitler Youth photo.  Then goes to RAD training, barracks shots, Then actions shots showing sunken ships, some cars, in the field shots, Gun placements, Earth bunkers, a Seaplane landing and last his grave site.  Measures 13X9 inches.  14 pages, with 77 pics, a few missing.  Ends with his Death in 1943.

German Calvary soldier photo album.  DarkGreen cover is missing the national eagle, most likely remove after the war.  Starts out with his photo in front, has photos of officers, training, a JU-52 landing, lots of in the field shots, Mountains, Horses, Horses in the snow, more in the field shots, earth bunkers, anti-tank ditch, Artillery, etc.  Measures 11.5X7.5 inches.  23 pages, 59 pictures, a few missing.