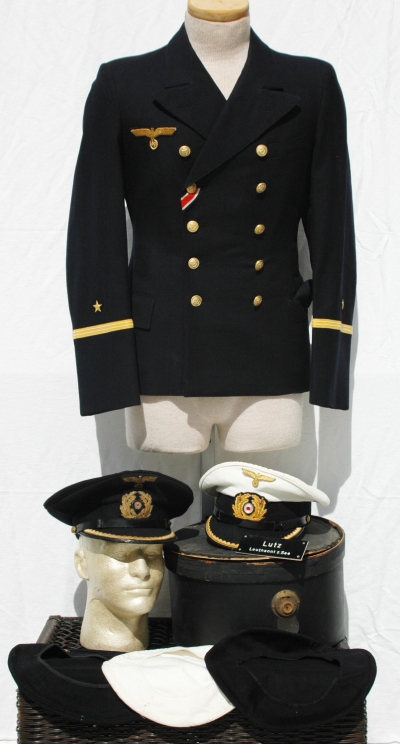 German WWII Kriegsmarine Named U-Boat officers grouping.  This ones rare and has a lot of items. First his Kriegsmarine officers tunic, NAMED to Ernst Lutz and officer serving on U-591.  DarkBlue fine twill wool tunic, double breasted cut.  Has Gilt Kriegsmarine buttons on front most are dated 1938 and 1940 meaning some were period replaced through normal use.  Tunic has a Fantastic Gold Officers breast eagle on the front, its in a two-toned style with the wreath a different gold color.  Tunic has One sleeve stripe and has the Gold star for serving Line officers.  It has the Iron Cross ribbon for the EKII in the button hole, included with this tunic is his Iron Cross second class, the medal on the ribbon.  The medal is with the short ribbon and the ring is stamped with what looks like "100".   The medal was in his pocket of his tunic.  Liner is Black silk and has the tailors lable sewn into the neck, the tailor is from GOTENHAFEN.  Inside the inner pocket is the name tag, worn and hard to read, but you can still make on his name, LUTZ.  Next are two of his visors, both visors and the other extra tops were all in this round carrying case.

First is his Blue topped visor, in DarkBlue wool, has with matching Gold age tonned bullion eagle and wreath on front, chinstrap and Blue wool topped visor with his rank scallops.  No damage to the top of the cap, but there is some moth damage at the rear bottom edge.  Tan sweatband and has a fantastic makers label under the sweatdiamond with the U-Boat image and GOTENHAFFEN, showing his tunic and caps were from the same tailor!  To the back of the sweatband were the seam meets there is some minor damage.  Next is his White topped visor.  Very clean visor has removable top as is the Blue topped visor.  Gold Metal eagle and Cellon wreath with chincord.  Bill is Blue wool covered with his rank scallops.  Liner is gold twill and has an unmarked sweatdiamond.  Sweatband is Tan and has a White stripe running in the center, plus his metal initials in it as well. The only damage is to the underside of the bill, it is broken in half, near the center where he might have folded it, otherwise its nice.  Next are two Blue extra tops, Blue wool, one has a Gold bullion eagle still on it, but moths have left damage around the eagle.  There is some moth damage to the top.  The other Blue top has moth damage as well, you can clearly see where the eagle was removed at one time.  The extra White top is clean, and shows the pin holes where the metal eagle went, no damage.  Next is the large visor carrying case.  Pasteboard round shape and has a seperate lid.  The top leather strap is missing and the lid shows damage to the rim and the inside pad, the main case is nice, Blue velvet inside and clean.  Last is a name plate with his name and rank, and four screw holes in each corner to attach to a locker, or foot locker possibly.

The grouping was left behind in Germany before his last patrol and has NOT been in any other collection.  There is some damage to some of the caps and the case, this is the way it was found and was stored.  Regardless, its EXTREMELY rare to ever find a grouping like this, I have never seen another set this complete.

Leutnant z. S. Ernst Lutz, second watch officer on U-591.  He was captured in July 1943 after being sunk by a U.S. Sub hunting aircraft off the coast of Brazil.  He was rescued and captured, then spent the rest of the war in U.S. Captivity.  You can read the history at www.uboatarchive.net/u-591.htm