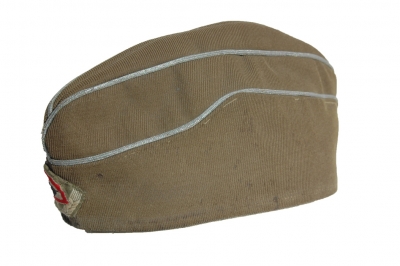 RAD officers overseas cap. A nice used example of the Labor Corps Sidecap.  Brown twill wool, the cap features silver wire piping to the crown and the scallops.  It has the enlisted version of the RAD spade handsewn to the front, these caps could have either the officers version or the enlisted version, its common to see both used.  The cap does show use and some sweat staining, but its a rare cap to find.  The lining is faded and is of a light pale green color, no markings inside.  Its well used, but a nice example.

Tweet
Published in Caps-Forestry, RAD, Red Cross, HJ, And Others