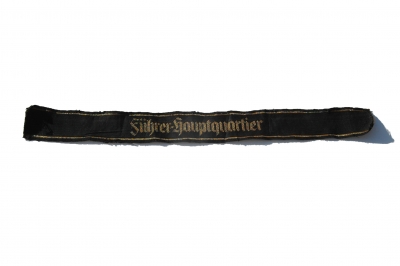 Army (HEER) Cufftitle for the FHQ.  This is the First pattern cufftitle, Fuhrer Hauptquartier from the massive grouping also on the site belonging to Baron Freytag-Loringhoven, you can read about him in the Army Uniform section.  This is the Fuhrers FHQ cufftitle, worn when on duty with Hitler, and this is the first pattern cufftitle.  VERY RARE to find, and its full length and in great condition.  This ones woven in fine gold thread front and reverse and shows light use.  See e\below for the original description.

Tweet
Published in Cloth and Metal Insignia-Army, Luftwaffe and Kreigsmarine