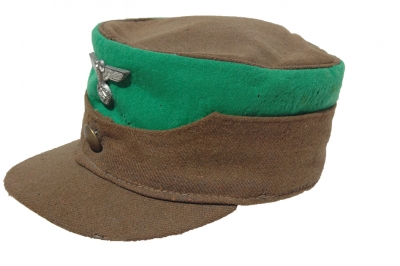 German Pre-War SA Kepi.  This ones in well worn and is in poorly stored condition.  Its a standard SA Kepi, with a twill brown wool and light apple green for the sides and front.   Its a private purschase made cap and early, most likely pre-RZM.  There mothing and tracks all over the cap, its still solid, and has the original gold pebbled button to the front and a silver wash eagle as well.   It has a gold liner that's torn in several areas, no RZM tag.  I really don't know any more about it, but its showing lots of age, the sweatband is nice but the cap was poorly stored after the war.  There's no chinstrap and it appears to never have had one.