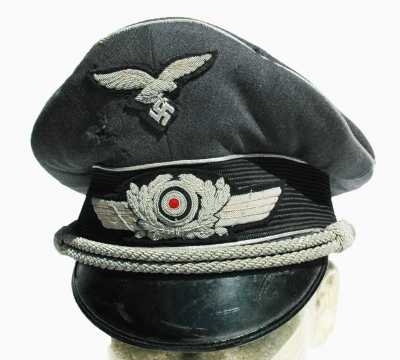 German WWII Luftwaffe officers visor cap.  Standard LW cap, this one originally came with a Luftwaffe Majors uniform, he was a pilot.  The uniform has since sold and the cap was not sold with it as the uniform set was named and the cap was not, so there was no way of showing it was his, but this cap has all the features of a pilot.  LW Bluegray twill wool body it has Silver cord piping to the crown and the capband.  Black capband it has a Silver bullion wire weave cap eagle and matching Silver wire cap wreath to the front.  Silver chincord as well.  The bill has a sharp down look to it and the cap overall has the "pilot look" with the angle to one side slightly.  This cap looks to have been worn in the capacity of a pilot.  Cap has some damage to the front next to the eagle, but no mothing.  Top quality maker inside, full Off-Yellow twill liner has a large sweatdiamond intact with the imprint in Silver lettering for the Luftwaffe.  Tan leather sweatband has vent holes at front and a small tear where the bill meets it.  Green underside to the LW bill.  The wire stifner inside the cap crown is removed as it typical with pilots caps.  This cap has been worn and has the look of it.