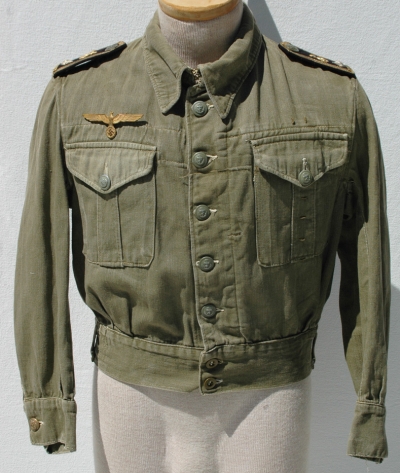 German WWII Kriegsmarine U-Boat battle dress short jacket.  This is is based on the British Battle dres jacket as was worn by KM U-Boat crews as captured stocks, but this one has been heavily modified to look more of the KM style with the removal of the lower waist belt and the addition of two lower waist buttons and other modifications.  Green cotton material in a short cut this one has loops for two medals on the pocket and loops for the metal KM Gold breast eagle above the pocket on the other side.  KM green steel buttons held on with the proper "S" rings.  There are slip-on shoulderboards for an NCO rank in Blue wool with Gold tress, a single pip and the emblem for a "Maschinist". or Engine personnel career.  Two Gold metal collar hooks added when is was converted during the war.  The breast eagle is Gold metal and is a single pin back, it's missing the lower hook.  This Battle dress was heavily modified during the war and is a rare jacket to find like this worn by U-Boat crews