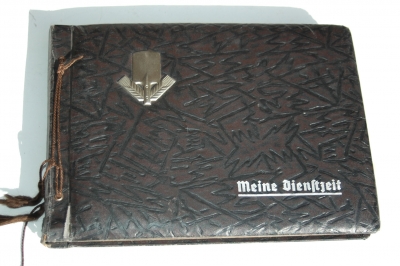 German WWII RAD photo album.  Large album, Standard style cover and Aluminum spade on the front.  Starts off in 1931,  294 total pcitures.  Ends in 1973.  This ablum shows him moving through the ranks into an RAD officer, best part is postwar photos of him that end in 1973!.  Lots of great shots, him on skis in RAD uniform, then on skis in 1973.  There are several photos taken postwar showing what apeears to be the ruins of his old camp.  That's unique in a photo album.  More photos postwar showing him at various buildings and fields, most likely where he was posted during the war.  Most pages dated.  Many pages clearly set up to show him there during the war, then there in the 70's, a fantastic "Now and Then" format.  Photos showing him on a motorcycle, RAD Bandsman, wearing a combat helmet in the field, Vehicles shots.  This is a rare album as it shows him starting in the ranks and getting promoted throughout the album to officer.  Then all the "now and then" pages are very unique.  Several photos are missing, onion skin pages between each page.  Measures 12 inches long by 9 inches wide.