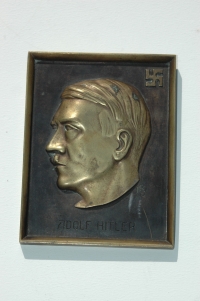 German Pre-war or Wartime cast bust of Adolf Hitler.  This is a wall hanger, that would hang in a persons home.  Heavy cast Bronze, well detailed relief to the head.  Has his name below and the makers name in the lower corner.  Has a hook on back to hang on the wall.  Measures 5X3.75 inches.  1/2 inch thick.

German WWII clothes hanger.  This ones unique!  its for the "ADOLF HITLER SCHULEN".  Excellent shape and clean.  Wooden hanger.

German Pre-war RAD or FAD Beer stein.  Nice early example, simple design of the Beer stein.  This ones early enough to be FAD or at the start of the RAD.  Nice example, Blue used for the design.  Has the RAD shovel to the front with the wheat stalks, and on the side for "GRUPPE 250" and "1935" on the other side.  No maker to the bottom of the stein.  A light stain to the Left side, this may clean off. Overall nice early example! About 5 inches tall. 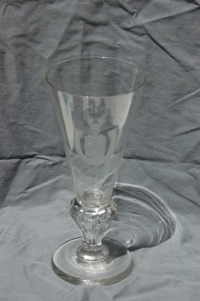 Engraved Glass or Goblet belonging to the 20th July Plot belonging to Freytag von Loringhoven. Made from German crystal, One of the last items to this massive grouping, please see in the Army uniform section the complete story behind this massive group of items that belonged to the brothers von Loringhoven.  This is an engraved tall glass that came with the grouping.  Its in excellent shape, no damage no chips to the glass.  Measures 9.5 inches tall, base is 4 inches across.  Has engraved on the front a coat of arms for von Loringhoven, with the words MIT GOTT UND MIT EHREN.  One of a kind glass.  See below for the original description.